At the beginning of 2021, the South African Reserve Bank (“SARB”) announced a relaxation of the rules relating to loop structures. The Bank of Namibia (“BoN”) has yet to announce their alignment to the easing of these restrictions. In light of the anticipated alignment, people should begin looking now at their estate planning structures to explore how their current structures can be enhanced under the advantageous regulation amendment.

Willem Bodenstein who heads up the Namibian operations of investment banking firm Bravura, comments as follows: “We are of the view that the BoN could make a similar announcement shortly, following the upcoming quarterly meeting of the Exchange Control Authorities of the countries that make up the Central Monetary Area (“CMA”). This would be in line with the multi-lateral agreement amongst the CMA countries of South Africa, Namibia, Lesotho and Eswatini. Should BoN follow suit, the current restrictions on loop structures for private individuals and companies including private equity funds based in Namibia will be lifted.”

What is a loop structure? 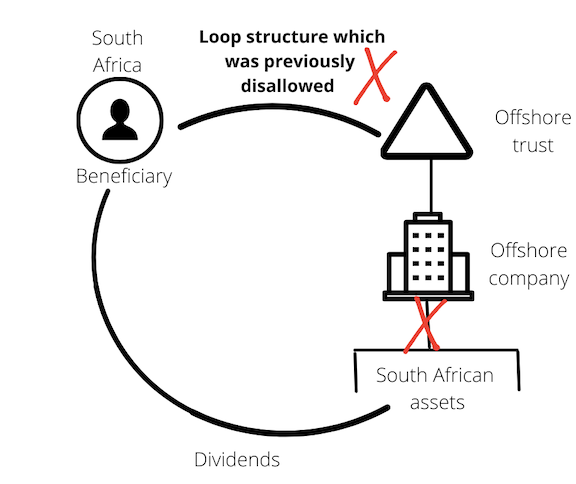 “Over the last few years, restrictions around loop structures have steadily been relaxed,” says Bodenstein, “The most recent relaxations included allowing loop structures where the Namibian exchange control resident in aggregate did not own more than 40% of the shares in a foreign company, which in turn held investments into any CMA country. Following this further relaxation, the 40% limitation will no longer apply.”

What will the potential changes mean for you?

Following an amendment of the rules around loop structures and assuming a similar approach would be followed to that of the SARB, the potential changes would be as follows:

Existing unauthorised loop structures, meaning loop structures that were created before the relaxation occurred, including those where the 40% limitation was breached, would have to be regularised with the BoN.

Other changes following from the scrapping of rules relating to loop structures include the following:

Bodenstein says, “There are still a lot of ifs, buts and maybe’s around the potential changes. It is strongly advisable to seek professional advice now in preparation for the coming changes and before entering into any transactions. An investment advisor such as Bravura can help you navigate these changes and assist in structuring your affairs to take advantage of opportunities.”