Bravura was named the Best Independent Advisory Firm for South Africa in the 7th annual Africa Global Funds (AGF) Service Providers Awards 2022. This is the fourth consecutive win for Bravura. Previous awards in the AGF include:

The AGF Awards were created to honour and generate both industry and public recognition of the outstanding efforts and accomplishments of fund service providers covering Africa. The prestigious AGF Service Providers Awards are recognised as a symbol of excellence, being the only international awards that pay tribute to stakeholders within African fund services. 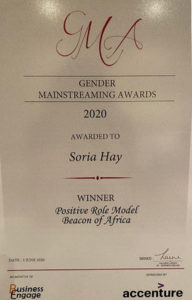 Soria Hay, Head of Corporate Finance at Bravura, was named as the Regional Winner for Gauteng in the “Positive Role Model Beacon of Africa” as well as being named the overall national runner up in the category in the Gender Mainstreaming Awards.

This category is in recognition of those individuals who are lighting the way for other role models and can be considered “elders” – less in terms of age but for their wisdom and knowledge.

The Gender Mainstreaming Awards are held each year to encourage private sector buy-in to achieving more meaningful representation of women in the mainstream of business. The awards, which this year included both regional and overall award categories, seek to celebrate companies and individuals who are guiding beacons of inclusive gender representation and serve as inspiration to South Africa’s business community.

Hay says, “Having been nominated for the 8th Gender Mainstreaming Awards was both a humbling and motivational experience. Taking part in the discussions and interviews which are a part of the shortlisting process made me think a great deal about what I could do to make an even bigger difference. Personally this was an incredibly enriching experience, and I am honoured to have been selected amongst a strong and inspiring group of my fellow women leaders.”